The SE and each owner are required to generate private keys securely and verify ownership of UTXOs (this can be achieved via a wallet interface, but formally should require connection to a fully verifying Bitcoin node). Elliptic curve points (public keys) are depicted as upper case letter, and private keys as lower case letters. Elliptic curve point multiplication (i.e. generation of public keys from private keys) is denoted using the . symbol. The generator point of the elliptic curve standard used (e.g. secp256k1) is denoted as G. All arithmetic operations on secret values (in Zp) are modulo the field the EC standard.

Mercury employs the 2-of-2 MPC ECDSA protocol of Lindell as implementated in the ZenGo gotham-city 2-party wallet. The 2-of-2 ECDSA implementation used has two parties (with private keys a and b) where the shared public key is P = ab.G and both parties cooperate to create a signature for P without revealing either a or b.

In addition, a public key encryption scheme is required for blinded private key information sent between parties. This should be compatible with the EC keys used for signatures, and ECIES is used. The notation for the use of ECIES operations is as follows: Enc(m,K) denotes the encryption of message m with public key K = k.G and Dec(m,k) denotes the decryption of message m using private key k.

All transactions are created and signed using segregated witness, which enables input transaction IDs to be determined before signing and prevents their malleability. The SE specifies and publishes a Mainstay slot ID (slot_id) for the root of the SMT, which all UTXO statechains can be verified against.

An owner wants to deposit an amount of BTC into the platform, and they request that the SE cooperate with the initialisation and key generation. To prevent DoS attacks on an anonymous service, the SE may require that the depositor provide proof of ownership (i.e. signatures) for the funds they wish to deposit before proceeding. The following steps are then completed:

The above key sharing scheme is the same as that used in the 2P ECDSA protocols [4,5]. The key generation routines of these existing 2P ECDSA implementations can be used in place of the above steps (which include additional verification and proof steps). 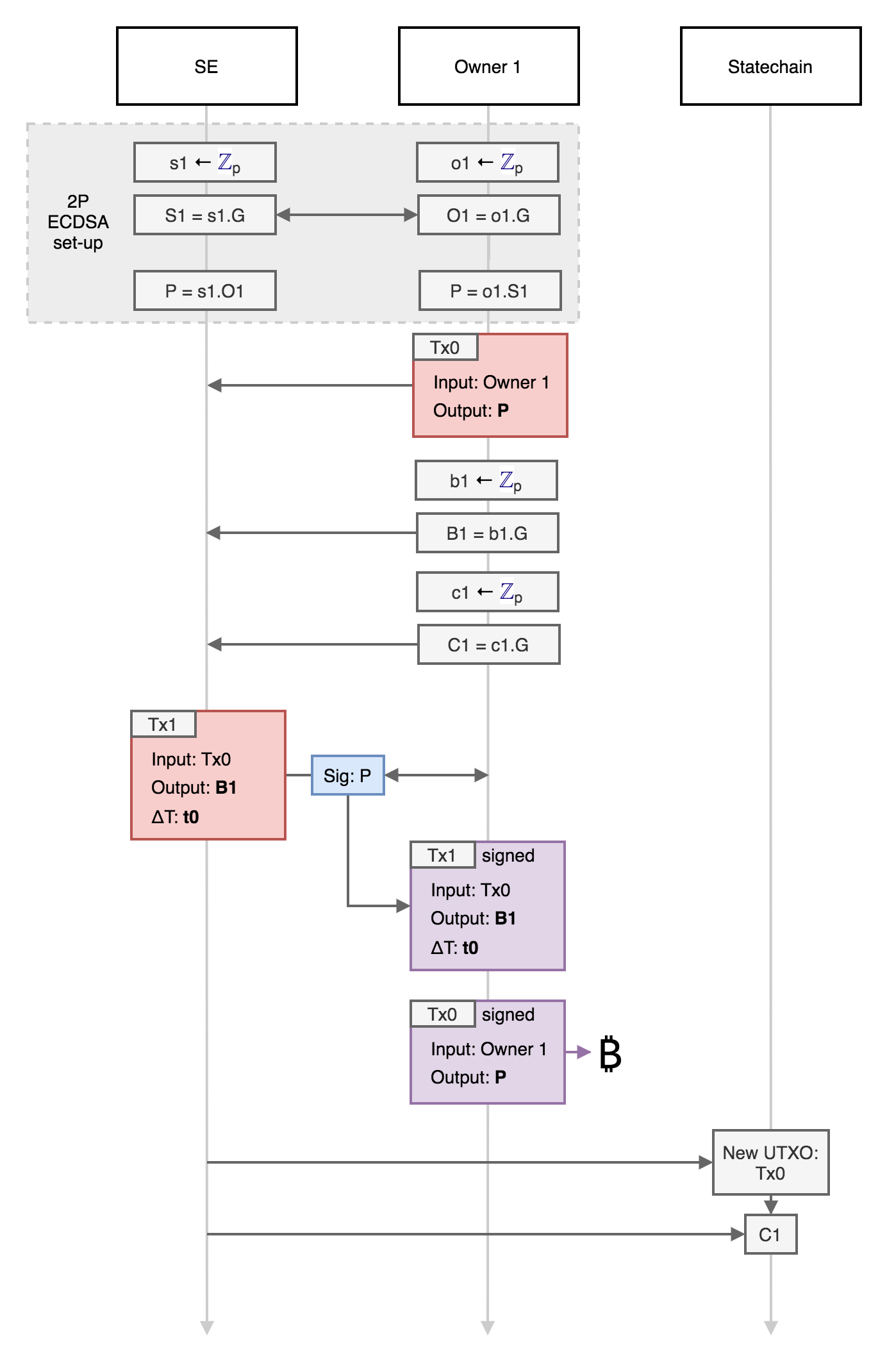 This deposit protocol is designed so that no funds are lost if either party becomes uncooperative at any stage. The deposit is only paid to the shared public key once the backup transaction is signed.

Owner 1 wishes to transfer the value of the deposit A to a new owner (Owner 2) (as a payment or as part of a complex trade). For this to proceed, the new owner must be aware of the public key that is used to authenticate the SE (SE). The new owner may require the current owner prove their unique ownership by signing a message with their key share (O1) as published on the statechain. The protocol then proceeds as follows:

The steps 3-8 only require interaction between the SE and owner 1, and can be performed at any time before the involvement of Owner 2 is required.

At this point the Owner 1 has sent all the information required to complete the transfer to Owner 2 and is no longer involved in the protocol. Owner 2 verifies the correctness and validity of the four objects, and the payment is complete. Owner 1 can then complete the key update with the SE at any time.

The SE key share update then proceeds as follows:

s2 and o2 are now key the private key shares of P = s2*o2.G which remains unchanged (i.e. s2*o2 = s1*o1), without anyone having learnt the full private key. Provided the SE deletes s1, then there is no way anyone but the current owner (with o2) can spend the output. 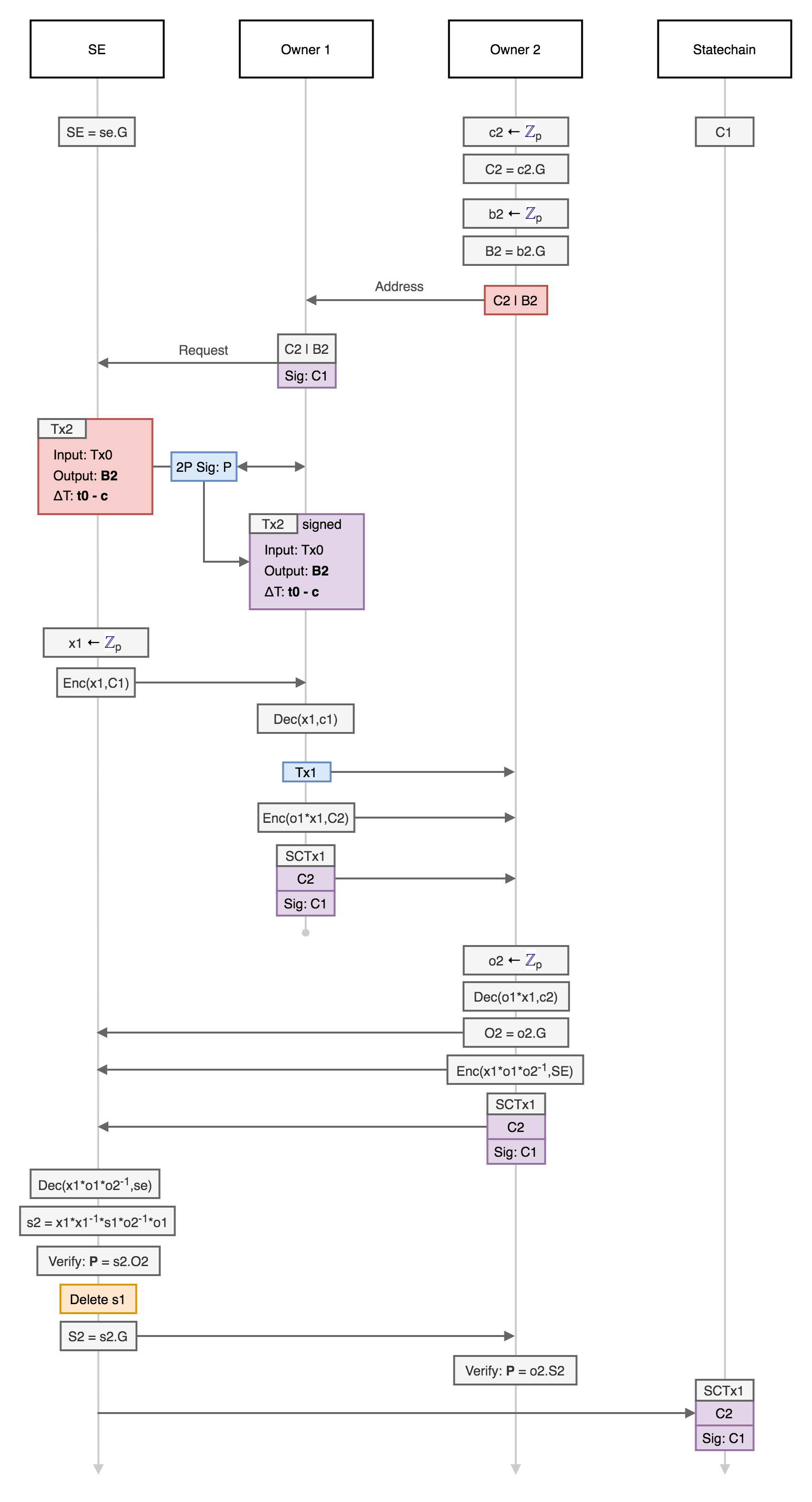 The SE keeps a database of backup transactions for the users, and broadcast them at the appropriate time in case the users are off-line.

The current owner of a deposit can at any time withdraw from the platform to either gain complete control of the shared key or broadcast a jointly signed transaction. The current owner can request that the SE cooperates in signing a transaction paying the UTXO to certain addresses specified by the owner. The SE may wish to charge a withdrawal fee for providing the service (F), which can be included in this transaction.

This would proceed as follows:

This would proceed as follows:

The owner must ensure they broadcast the backup transaction immediately after the timelock to prevent previous owners from claiming after longer timeouts.